A Busy Spring and Summer


What a most amazing Conference we just had. You should see my photos of what midnight looks like in Whitehorse! 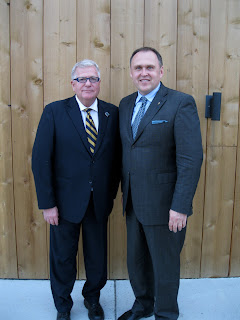 The Conference was terrific and I wish everyone could experience the wonderful Yukon hospitality!

While up North, I went to Skagway which is one of the most beautiful drives in the world. Forest, dessert, lakes, barren rocks above the tree line, crossing the Rockies, and then straight down to Skagway. I had lunch in a brothel (now a museum), took a helicopter ride over the mountains, one of which my grandfather climbed on the way to the Klondike looking for gold a century ago (he never found much, just enough for my grandmother’s wedding ring). And then it was back to Whitehorse, where I had the opportunity to have dinner with the Premier of the Yukon, Darrell Pasloski.

I also did several important things before getting to the Yukon, such as attending the Organization of Military Museums of Canada conference in London, ON, attending meetings with the President of the Chinese Museums Association in Toronto, and I was one of three speakers to officially open the new Robert Bateman Museum in Victoria, BC.

And now I’m in New Brunswick, where I will be working for the summer. I want to wish everyone a great summer and look forward to seeing everyone in the fall!

Email ThisBlogThis!Share to TwitterShare to FacebookShare to Pinterest
Labels: director