An Inside Look at the CMA 2016 National Conference

The Canadian Museums Association’s National Conference is coming up this April 11-15 in Halifax, Nova Scotia. With study tours, workshops, keynote speakers and fun events scheduled over the course of this five-day conference, there’s a lot for attendees to look forward to.

Nova Scotia is a particularly scenic Canadian location with a rich history.  Conference attendees should look forward to a unique Maritime experience, with the ability to explore their surroundings and learn more about East-Coast culture. The full day Study Tour on day five of the conference (at an additional cost), fittingly named “Iconic Nova Scotia: A Maritime Coastal Experience,” will allow participants to explore the historically significant locations Nova Scotia has to offer.

A particularly interesting point of this tour will be a stop at Peggy’s Cove Lighthouse. While this lighthouse and the cove it resides on are quite famous, not many know the legend that accompanies this quaint fishing village. As the story goes, according to Peggy’s Cove Costal Region website, a schooner wrecked on “Halibut Rock” off the lighthouse point in a “Southeaster” during one treacherous storm. The only rumored survivor of this shipwreck was a woman (or in some versions of the tale, a young girl) named Margaret, nicknamed Peggy of the Cove, who went on to marry one of the eligible bachelors of the Cove. People from places nearby would come to visit Peggy, which led to the location eventually being nicknamed “Peggy’s Cove.” William deGarthe writes in his book, “This is Peggy’s Cove,” that this story is “generally more accepted, because of its romantic and dramatic appeal to most people.”

The second version of the story is much more simplistic, stating that as Peggy’s Cove is near the entrance of Margaret’s Bay, the Cove was short formed over time from Margaret’s Cove to Peggy’s Cove. Though no documentation confirms the legends of the shipwreck, locals like Ivan Fraser owner of a Peggy of the Cove museum created from his childhood home, celebrate the tale of Peggy through artwork, storytelling and more. Fraser’s childhood home that doubles as a museum is completely covered by a painted mural depicting Peggy’s Cove, lighthouse and all.

The story behind Peggy’s Cove and its lighthouse is just one piece of history Nova Scotia has to offer and only one of the stops on the list of significant places available to explore during the Canadian Museum Association’s National Conference.

The places you’ll visit in Nova Scotia will be well worth the trip to this year’s conference, as will the people you’ll hear from. The Canadian Museum’s Association has a strong list of keynote speakers, who will no doubt inspire. One of many interesting speakers at this year’s conference is explorer Wade Davis.
But explorer isn’t his only descriptor; Davis has been labeled a scientist, scholar, poet, anthropologist, ethnobotanist, writer, photographer, filmmaker and one of the National Geographic Society’s (NGS) Explorers for the Millennium. The NGS defines exploration as more than the idea of finding new places. Explorers like Davis need to be creative and according to National Geographic Adventure, “need to redefine the nature of exploration itself, casting it, for instance, not as a straightforward search for unknown landscape, but as an emergency investigation of the disappearing species and cultures that live upon it.” Davis has done just that, exploring the Amazon, the Andes, East Africa and numerous other places, where he’s explored local tribes and learnt about different cultures across the globe.

From 2000-2013, Davis was an Explorer-in-Residence with National Geographic. This program offered Davis the support to develop programs and carry out fieldwork in his areas of study.
One of his most notable feats includes a three-year stay in the Amazon and the Andes through the Harvard Botanical Museum, where he lived among fifteen indigenous groups in eight Latin American nations. During this time, he also made 6000 botanical collections. He has won numerous awards, written fifteen books and a number of articles on his exploration experience.

Davis’ research has been the topic of over 900 media reports and interviews in Europe, the Far East and both North and South America. He has been featured in a number of lectures including a TED Talk and his research has also inspired documentary features. One particularly interesting fact about Davis is that his research has also inspired three episodes of The X-Files, a popular television series. Davis is sure to spark the interest of all conference attendees with his lifetime experience in exploration and learning.

Workshops: Why Things Like Social Media Are Important For Museums To Learn About.

In between the sightseeing and inspirational talks, the National Conference offers a wide variety of workshops. On day two of the conference, the “Inspiring Museum Social Media Solutions” workshop will be presented by Victoria Castle, Online Marketing Officer from the Nova Scotia Museum and moderated by Ryan Dodge, Digital Engagement Coordinator from the Royal Ontario Museum. The workshop will start with the basics of social media followed by how to take a museum’s online presence to the next level and use social media as an effective tool. 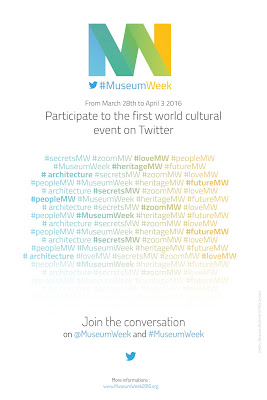 Think about #MuseumWeek. This campaign, the first worldwide cultural event taking place solely on Twitter, created global museum buzz. The campaign motto reads “7 days, 7 themes, 7 hashtags.” The sharing of photos showing museum secrets, architecture, inspiration, souvenirs and more engaged the general public and made Canadian museums a bigger part of the media buzz during the event. In March 2015, #MuseumWeek had 2825 participants in 77 countries. Over 130 Canadian museums participated in this Twitter event.

This year, the events motto is the same, but of course the hashtags are different. At the end of March, the #MuseumWeek themes will focus on museum secrets, honouring the people who have helped make your museum, telling the story of your building, the heritage of your museum’s content, sharing your museum’s innovative projects, zooming in to show insight on your collection and finally sharing what you love about the museum. All of this can be shown through photos shared on Twitter.

As online campaigns like this become increasingly important, the ability for museums to engage with the public through social media becomes necessary. The “Inspiring Museum Social Media Solutions” workshop during the National Conference will enhance participants knowledge on the value of social media use, the creation of content, the analytics of social media use and the process of launching social media campaigns, so your museum can be active and engaged online all year, not just during campaigns like #MuseumWeek.

This is an inside look at just a few of the fantastic events 2016’s National Conference has to offer. Whether it’s the excursions, speakers or workshops, there is something for everyone to enjoy at this year’s National Conference and much to learn. Share your thoughts on the Conference with us on Twitter by using #CMAMC2016.